*Postmen in Victorian England were popularly called “robins.” This was because their uniforms were red. The British Post Office grew out of the carrying of royal dispatches. Red was considered a royal color, so uniforms and letter-boxes were red. Christmas cards often showed a robin delivering Christmas mail.* 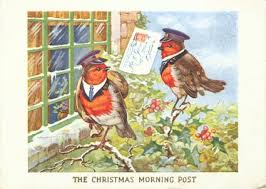